Each player receives a rack, a sheet from the notepad, and a Code 777 card. They place the rack in front of them with the side on which the tiles are to be placed pointing away from them.

Each player then draws three tiles and places the tiles on the rack belonging to the player to their left, making sure that this player does not see the numbers. Each player can now see the numbers of all their opponents but not those in their own rack.

The object of the game is for the players to discover, as quickly as possible, what numbers are on their own rack. This is done by using the information obtained from the question cards.

Randomly select a player to begin. The player who has been selected takes the top question card from the stack, reads it out loud and answers the question. The question is answered by reviewing the numbers that the player can see and not about the numbers on their own rack. Here are some example answers:

"How many numbers do you not see at all?" The answer could be: "Three", if for example you didn't see any 1s, any 2s, and any 5s on all the visible racks. Don't say which numbers you don't see.

Each answer gives every- one, except the reader, a little bit more information.

Question cards that have been answered are placed in a discard pile, and if all the question cards are played, the cards are re- shuffled and used again.

If two or more players announce at the same instant that they have a solution, then the player to the right of the card reader gives their solution first (and so on counter-clockwise).

One point is awarded for a correct solution. A solu- tion only counts as correct if all three numbers have been guessed correctly. No points are scored for a wrong solution. In both cases the tiles are taken out of the player's rack, placed out of play, and are then replaced by three new ones, naturally with- out letting the player see the new numbers.

If you guess correctly, then you get to see your code. This could help you if you knew the numbers, but not the colors, and therefore you can mark your sheet definitively with the tiles you had.

If you guess incorrectly, then you do not get to see your code. You do not get rewarded for an incorrect guess by getting more in- formation on the tiles that you had.

In both cases, of course, all other players get a little more information, as the rack of the player who guessed is replenished with new tiles.

Note that, since no one gets to see the final tile before a reshuffle, no one will ever have "perfect in- formation" on all the other tiles in the game, and therefore be able to make a "perfect guess".

The first player to score three points is the winner.

If there are only three players, tiles are still placed on 4 racks. The rack without a player is visible to all the players.

With 2 players, the player whose turn it is deter- mines which of the 2 racks with no player gets refreshed.

To make the game more difficult, as a variant, you can perform the reshuffle when four or seven tiles are remaining in the draw pile.

It is extremely difficult if you refresh when seven tiles are still remaining in the draw pile!

For an easier game, per- form the reshuffle when zero tiles are remaining. This will provide perfect information to the players upon revealing that last tile before the reshuffle. 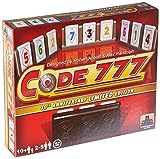