The game is set in late prehistory, a time of transition - when our distant ancestors, who had struggled and barely survived for ages in very small nomadic groups, began to feel that their lives would be more secure and less arduous if they formed larger groups. This led to the formation of the first villages.

A board showing a vast area divided into 60 territories of 4 different types. These are grouped into 12 regions, each containing 5 territories; these 12 regions, bordered by rivers, the shores of lakes, and the edge of the board, are used only in the preparation phase of the game.

The 60 territories are of 4 types: forests (dark green), mountains (light gray), steppes (tan) and grasslands (light green). Also on the board, but separated from the playing area, are a chart of the five epochs of play and a scoring track of 60 spaces.

There are always 5 clans in play (regardless of the number of players), each clan identified by a color: red, blue, green, yellow, and black.

Each player tries to score points for his secret clan, while keeping his color secret from his opponents.

Choose a starting player by lot. That player starts and then play continues in clockwise order.

There is only one kind of move in this game: the player, whose turn it is, moves all the huts from a territory of his choice to a neighboring territory, provided neither territory is empty. In this manner some territories become vacant while villages are formed in others.

If both territories contain the same number of huts, the player may choose which group to move.

In this area, a player can move the group 1 huts to only two possible territories, as the other neighboring territories are empty.

A player may not move the group 2 huts as they number 7 and cannot be moved.

When a player moves huts such that a territory with huts (or a single hut) is completely surrounded by empty territories or the edge of the board, a village is founded in that territory.

When a village is founded, the player who made the move takes the next village chip from the epoch chart (the chips are first taken from the first epoch, and then the second, and so on) and places it before him on the table (at the end of the game he will score one point per chip).

The player then calculates the value of the village and the scoring discs are moved accordingly on the scoring track.

The huts in area 2 may not be moved to area

, as that territory is empty.

Since all 5 colors are present, the single green, yellow, and blue huts are eliminated and removed from the board. The size of the founded village is also reduced to 6.

The game is played over 5 epochs. In each of the first four epochs, one type of territory is particularly favorable for the formation of villages while another type is extremely unfavorable, so that any village completed there in that epoch is inevitably doomed. On the epoch chart, the left side indicates the favorable type of territory, the right side the unfavorable one.

In the 5th epoch every kind of territory is favorable.

An epoch comes to an end when all of its village chips have been taken. Then, the next epoch begins.

When player makes a move that causes 2 or more villages to be found- ed at once, that player decides the order that the villages were founded in. This can be particularly important when the founding cross epoch boundaries.


The Value of a Village

When a village is founded, its basic value is the total number of huts in it (after any strife). There are 3 possibilities:

In the 3rd epoch, the steppe is the favored type of territory. Therefore, the clans involved earn 3 bonus points.

In the 2nd epoch, the grassland is the unfavored type of territory. The village's value is 0!

That is, having more huts in a village, does not give an advantage.

There are 5 huts in village 1: 3 blue, 1 yellow, and 1 red. It is founded in the 1st epoch in the forest: the favored type of territory.

Thus, the village is worth 6 points: 5 for the huts and 1 bonus point. The blue, red, and yellow scoring discs are moved 6 spaces on the scoring track.

At this point, all the players reveal their secret colors, turning their clan cards face up. Remove the colored scoring discs from the board that are not in play.

The players move their scoring discs forward on the scoring track to score the village chips they collected for founding villages (1 point per chip). 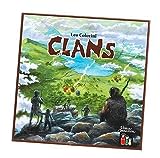