America's industrial boom would have been unthinkable without the railroads. It was only possible to open up this huge country by transporting the necessary materials over long distances.

The industrial development of North America is therefore synonymous with the expansion of the railroad networks of individual companies, many of which were founded at the time with the help of investors who put up the necessary capital.

Names such as Cornelius Vanderbilt and Charles Morgan bear witness to this period, but the financing of the railroad was not the only thing these investors had in mind. The most important goal of all was to make as much profit as possible.

The game board and Charters of the four railroad companies are laid out.

A locomotive from each company is placed on the cor- responding start hex with the Wabash start hex remaining empty to begin with.

The companies' counter pieces are placed on the fields of the matching color on the income track. The Wabash piece is not placed yet. The "+50" game tokens are laid out.

20 houses are placed on the appropriately marked area on the game board as a general supply. 1 house is placed on each of the boxes 1 (Detroit), 3 (Wheeling) and 4 (Pittsburgh) on the Industrial City track.

One player takes over the bank and distributes a total of $120 among the players as starting capital. Depending on the number of players, each one receives the following amounts:

Before the game begins, one share from each railroad company (except Wabash) is auctioned off in the sequence PRR - B&O - C&O - NYC.

The banker is the starting bidder in the first auction. To begin with, a PRR share is auctioned with a minimum bid of $7.

The starting bidder can either bid or pass. Moving clockwise, each player must then offer a higher bid than the currency bid or pass. A player who has passed can no longer participate in the auctioning of the same share. The Auction continues until all of the players except one have passed.

Sequence of the auctions and starting bids:

The player who has offered the highest bid pays the bid amount to the railroad company (the money is placed on the corresponding Charter) and is given the share, which is laid out face up in front of the player.

If no player bids for the share, the starting bidder gets it for free.

The player who acquired the share becomes the next starting bidder in the subsequent auction. Each auction is conducted in exactly the same manner as the first one. The further sequence of the auctions is:

The player who received the PRR share starts the game.

As investors in the economy of late 19th century America, the players try to make as much profit as possible in the thriving railroad sector.

They use their money to acquire shares in the railroad companies so that they can influence their development and earn money through the dividends that are paid out during the game.

Each railroad company generates an income, which is distributed completely among the shareholders (players) in the form of dividends during the Dividend Phase. The income of a company can be increased in two ways, by either connecting up new City and Mountain hexes to a route network or by developing those hexes already connected to a route network.

Each railroad company receives the necessary capital essentially by selling shares to the players.

Only the player who has invested wisely and expanded the right companies is likely to receive the highest dividends. The player with the most cash wins in the end.

In turns, beginning with the starting player, the player whose turn it is chooses an action and then decides to either implement the action or do nothing.

After a certain number of actions, the game is interrupted by a Dividend Phase.

The following options can be selected:

To begin with, the indicator needle of the selected option is moved one space to the right after the player selects the action.

If the indicator of an action points to red, the player cannot select this action.

If two indicators point to red, a Dividend Phase is called after which all indicators are set back to green. Only after this phase does the player make his move.

Note: Although every player must select a course of action and mark it with the corresponding indicator, they do not have to implement it. In this way, it is possible to deliberately cause a shortage of certain courses of action during a round of play.

Example: A player does not have much money, so they could not keep up with the bidding at an auction. For this reason, the player chooses the option "Auctioning of a share" but does not offer one. By doing so, the player misses out on a course of action but ensures that there will be one auction less during this round of play.

The player can select a share for auction belonging to any railroad company.

Exception: Shares in the Wabash railroad company (black) are only available once the route network of one of the other companies has reached Chicago.

The selecting player must bid at least the minimum bid or pass.

The minimum bid is calculated from the current income of the corresponding company (marked on the income track) divided by the number of shares already sold, including the one currently being auctioned. The result is the minimum bid, whereby decimals - no matter how high - are always rounded up.

Note: It can happen in the course of the game that all of a railroad company's shares are auctioned off. The shares of this company are then no longer available.

Moving clockwise, each player either offers a bid, which must be higher than the previous one, or passes. Players who have passed cannot rejoin the auction. Bidding continues until all players but one have passed.

The player with the highest bid pays the offered sum to the company (the money is placed on the company Charter) and is given the share, which is placed face up in front of them.

If all of the players have passed, the share remains on the company Charter and no money is paid.

Note: It is not always an advantage to buy a share at the lowest possible price, because it is only the proceeds from the sale of shares which enable the railroad companies to expand their route networks, thus increasing their income (and therefore the share dividends too).


B. Expansion Of A Railroad Company's Route Network

A player can expand the route network of a railroad company if they own at least one share in it.

Note: Only 1 locomotive from each company can be placed on each hex. Each company has a certain number of locomotives. Once these have been used up, the company can no longer expand its route network.

A route network can be expanded by up to 3 hexes. The player places a locomotive of the corresponding company in each new hex.

All hexes along the route of a company must be connected to their starting city by means of their locomotives (routes). Start hexes may not be developed. Branching is permitted.

Locomotives from all companies can be placed on all City, Industrial and Plain hexes. Only one single locomotive can exist on Forest and Mountain hexes and no other companies can build there.

Important: Every time one of the 5 companies places a locomotive in Chicago (i.e. expands their route net- work to that city), the game is interrupted and a Chicago Phase begins.

Locomotives from all companies are allowed in the following hexes:

Only the locomotive of one company is allowed on the following hexes:

When a locomotive is placed in a hex, the corresponding company must pay the costs from its available money (cash on the Charter) to the bank.

The costs are calculated from the red value indicated in the hex multiplied by the number of all locomotives in that hex (including the one that has just been played).

Note: A company can only spend as much money as it currently possess. A player may not lend their own money.

The money owned by the companies and players must be strictly separated!


Increasing The Income Of The Railroad Companies

A company can increase its income by placing a loco- motive on a hex. The increase is marked on the income track:


C. Development Of A Game Hexes

Although it is the Start City hex for Wabash, Fort Wayne may be developed and built upon because it is also regarded as a City hex.

Conditions for Developing a Game Hex

The following fields can be developed with this option:

City / Mountain / Forest hexes - At least one locomotive must be in the hex. Each hex can only be developed once. A house from the general supply is placed on the hex.

Exception: Detroit - This industrial city is only developed automatically, by one space on the industrial track at the end of the Dividend Phase. A locomotive does not have to be in Detroit. Detroit is the only City hex that is not developed by the players.


Effects of the Development of a Game Hex

. This increase is transferred to the income track. (The marker pieces of the companies in question are moved by the given number of hexes).

- The income of every railroad company present on this hex increases by the difference between the new and the old box on the industrial track.

(This means that the income increases by 1 for every development in Detroit and Wheeling and by 2 in Pittsburgh).

- The company in question receives $2 immediately from the bank (placed onto the Charter). Its income does not change.

When it is a player's turn and two indicators on the gauges are already in the red area, the game is interrupted and a Dividend Phase is called. The player does not make their move until this phase has been completed.

The following three steps are conducted in turn during this phase:

The game then continues with the player whose turn it is.

After the auction, the game continues with the next player on the left.

When one of the following four conditions has been met:

The game ends as soon as the next General Dividend has been paid out.

The players now count their money. The player with the most money wins. In the event of a tie, the players concerned share the victory.

Note: Shares do not count when determining the winner. 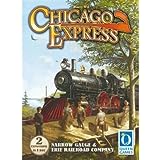