Inside the Cave Troll's lair lie riches and dangers beyond one's wildest imagination. In Cave Troll, two to four players command brave heroes in an attempt to reap the most treasure from the dungeon. You must wield powerful artifacts and summon vile monsters to defeat your opponents!

Each room of the game board has a gold value, which represents the amount of treasure contained in that room

To set up Cave Troll, follow these steps in order:

Cave Troll is played over a series of turns, beginning with the first player and proceeding clockwise. During his turn, a player can perform four actions (except during the first few turns of the game). With each action, the player chooses one option from this list:

From then on, all players can perform four actions during their turn.

A. Draw and Play a Card

Each player card contains a brief summary of the character or event effects and these summaries are also found on the reference sheet.

When a player performs this action, he draws one card from the top of his player deck and adds it to his hand. Then, he plays one card from his hand and resolves its effect.

When a player is instructed to remove a figure, he takes it from the game board and places it back in his play area.

B. Move a Character

When a player performs this action, he moves one of his characters (either a hero or monster) on the board to an adjacent space. For more details, see "Movement".


C. Use a Character Action

When a player performs this action, he chooses one of his characters on the board whose ability requires an action and resolves that ability. Abilities that require an action are preceded with the word "Action".

In each player deck is a "Find an Artifact" card. When it is played, the player draws an artifact card from the artifact deck and places it facedown in front of him.

When a player performs the Play an Artifact action, he reveals his facedown artifact card, resolves its effect, and returns it to the game box.

During the game, characters move around the dungeon, which consists of three types of spaces: staircases, pits, and rooms. Rooms are separated by walls and doorways.

When a player moves a character, he moves it from its current space to an adjacent space. Characters cannot move through walls, but they can move through doorways. Monsters can occupy any type of space. Heroes can occupy staircases and rooms, but cannot occupy pits for any reason.

A few character abilities, such as the Cave Troll and the Knight, prevent other characters from entering their room.

This section provides a list of rules and clarifications for the abilities found when playing the classic game.

The Adventurer has no ability.

When the Knight enters a space that contains any Orcs, remove all Orcs from that space.

When the Dwarf's room is scored, the printed gold value is doubled once for each Dwarf in the room.

The room's gold value is doubled regardless of which player controls the room.

The Barbarian counts as two heroes when its room is scored.

The Barbarian cannot be pushed by the Wraith.

Action: Place the Thief on any room or staircase that does not contain an opposing Knight.

The Thief cannot use its action ability to enter a room that contains an opposing Knight.

Place your Cave Troll figure in any room. Each player may move one of his characters from that room to an adjacent space; all other figures are removed.

Action: Remove one hero from the Orc's room.

When the Wraith enters a room, push one character from that room to an adjacent space.

Action: Push one character from the Wraith's room to an adjacent space.

Place your Treasure Chest figure in any room.

The Treasure Chest increases the value of its room by four gold.

This section provides a list of rules and clarifications for the abilities found when playing the variant game.

Once per turn, when the Giant Slayer enters an empty room, gain one gold.

Heroes in the Paladin's room cannot be affected by Banshee or Grunt abilities.

Action: Take one opposing Banshee from the Paladin's space and place it on any pit.

When the Berserker's room is scored and an opponent has more heroes in that room than you, divide the gold evenly.

The Berserker can enter a room containing five opposing characters.

Action: Remove one lone Grunt or one lone hero (except an Assassin) from the Assassin's room.

A character is considered "lone" when it is the only character of a player's color in a room.

The Rampaging Troll can move only once per turn.

Action: Push two characters from the Rampaging Troll's room to adjacent spaces. Then, remove all other figures from that room.

Action: Remove all opposing Adventurers from the Grunt's room.

When performing a move action, the Banshee can move up to two spaces.

Action: Move one opposing character from an adjacent space to the Banshee's space.

Players score rooms and gain gold when either situation occurs:


Check for Scoring the Board

Some cards contain a scoring icon at the bottom of the card. After a card with one or more scoring icons is played and resolved, it is placed faceup in the scoring pile instead of the owner's discard pile.

If there are no cards in the scoring pile, the current player creates a new scoring pile near the game board.

If the card just placed in the scoring pile causes the total number of scoring icons to equal or exceed five total icons, the entire board is scored, one room at a time.

Each room on the board that contains heroes is scored (see "Scoring a Room"). After all rooms on the board have been scored, all cards in the scoring pile are returned to the game box, and play resumes where it was interrupted for scoring the board.

When a room is scored, the first step is to determine which player controls the room. The player with the most heroes in a room controls that room.

The controlling player gains an amount of gold equal to the room's gold value, advancing his gold counter that many spaces along the gold track.

In the case of a tie for control of a room, no players gain gold for that room during this scoring.

The game ends after a player finishes an action and he has no cards remaining in his game deck. That player gains 3 gold.

The board is then scored one last time. Any players with unused artifact cards gain gold equal to the number printed on the gold coin in the lower-right corner of the card. The player with the most gold wins!

Each player has a variant set of character cards marked with a star icon in the lower-left corner. These variant characters are represented by the same plastic figures, but they have different abilities.

Note that Adventurer cards do not have an icon and are used when playing with either set of cards.

When playing the variant game, be sure to use the reverse side of the reference sheet, titled - "Variant Game", with the matching star icon. This side explains the character abilities used Star Icon in the variant game.

Example of a Turn:

The red player begins his turn with four actions.

Action 2: The Wraith's ability allows it to be moved to the lower-right room (which already contains five characters), however the red player must immediately push one character out of that room. He chooses to push the blue Orc to the adjacent room on the left.

Action 3: The red player uses the Wraith's action ability to push the blue Thief into the same room as the blue Orc.

Action 4: The red player chooses to move his Orc, which he can move to either adjacent room. He decides to move it to the room below. 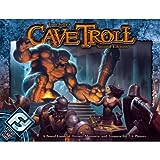