That sneaky Fox is slinking around again, looking to steal your prize chickens! Lucky you, he's so greedy he can't carry all the chickens he steals.

He stuffs chickens into his pockets till he loses his britches, sending chickens everywhere!

When the Fox's drawers drop, save your chickens and get them back to your coop to win!

Be the first to save 5 chickens by filling up your chicken coop.


Collect the chickens and form a pool. Deal one chicken coop per player.

The player who makes the best clucking sound goes first.

The player rolls the die and places as many chickens as indicated on the die into the Fox's pockets. S/he may choose any pocket to put the chickens into.

Before ending his/her turn, the player must firmly press the Fox's head one time, until it clicks.

If nothing happens, play follows the pecking order and continues to the left.

Watch out! Since the Fox is so greedy, he will end up losing his pants! When this happens, you must save the chickens as fast as you can by scooping them up one-by-one and placing them safely in your chicken coop.

But watch out for FOWL play-you can only use one hand to rescue the chickens!

If the Fox loses his pants and no one has a full chicken coop, keep the chickens you have collected in this round, and play again until at least one player has a full coop.

Each chicken coop has 5 empty spaces.

The first player to fill their chicken coop is declared the winner - you rule the roost!

If there are no chickens left, take turns pressing the Fox's head until his pants disappear and the chickens escape.

If two players fill their coop at the same time, both are declared the winners! 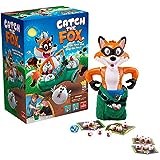 Mr Bucket and Catch the Fox