Welcome to Calamityville, partner! Join the rush for gold in this crazy chase for money and property. But beware of calamity, friend. It can strike at any time from a number of unlikely sources!

To be the player with the most money when the gold runs out!

Each player picks one marker to be their prospector game piece and places it at the train station. Select one player to be the banker.

Shuffle and put the 5 gold nuggets face down in the river (so you cannot see the words). Place the Wild Donkey in the center of the corral on the board.

Everyone starts their prospector at the train station. Play moves clockwise around the board.

On each turn, players roll both dice. If a newspaper card is rolled, read the top newspaper card out loud, follow the instructions, then move your marker the correct number of spaces shown on the numeric die.

If you do not roll a newspaper card, just move the number of spaces shown on the numeric die.

After a newspaper card is read, it is discarded and not used again.

In this instance, the player reads, the top newspaper card, follows the instructions, then moves six spaces clockwise.

In this instance, the player reads no newspaper card and moves four spaces clockwise.

There are 29 yellow newspaper cards while the town is booming, and 20 red cards when the town is about to go bust.

To purchase property, you must land on a vacant space on the gameboard. Each property costs $200 to purchase.

Players may buy any available property and place the building on that vacant space. Players receive the deed from the bank immediately upon purchase.

If a player can buy all three of one type of property (bank, store or hotel), they will get bonus rent (excludes mines). Players can never own more than five properties (including mines) at any one time.

If you land on a spot owned by another player, you must pay them rent. Amount of rent is equal to the value of the space on the board times the number of similar properties in the owner's list of properties.

To purchase a mine, land on any vacant mine space and buy a mine for $200. Choose one of the five gold nuggets in the river, turn it over and place face up on the gameboard, next to their mine, for all players to read.

If it is "Real Gold", the player gets $500 immediately from the bank, and $500 each time they land on their own mine.

Each player to land on a mine with "Real Gold" must pay the owner $500 in rent.

If the nugget is "Fool's Gold", the owner gets nothing, the mine is worthless and free to visiting players but still counts against the owner's total number of properties.

Mines do not generate double rent like normal properties - the rent is $500 no matter how many mines the owner possesses.

The saloon owner collects rent but the amount varies depending on how lucky or unlucky you are at the saloon!

Players landing on the Saloon must roll the numeric die to see how much money they lose to the owner from gambling Amount of money lost is $100 x roll of the die.

Players landing on the train station roll for money found in the conductor's safe.

Amount of money found is $100 x roll of the die (same rolling method as the saloon). Passing the train station gets players no money - you must land on it to collect the riches.

Players must keep the donkey in the corral while aiming and kicking his legs. Players cannot knock down more than one property at once.

If two are knocked down, the building that was not the intended target is stood up again. Be careful aiming the donkey! If you miss, tough luck prospector, the building remains intact.

After a building is destroyed, the deed of the property is returned to the bank and it can be bought like normal property again.

Destroyed buildings must remain in the same space for the remainder of the game and cannot be moved to another vacant space, they can only be bought again and rebuilt on the same space.

Step 1: While holding the front of the donkey, insert the legs into the back of the body. Press until a click is heard, locking the legs into place.

Step 2: Aim the donkey at the intended target, being sure to keep him in the corral. Gently press his head down and watch his legs kick like crazy!

Don't run out of money or tough luck, prospector! Property is foreclosed and the broke player is sent packing out of town on the next available train to Poorhouse, USA!

Foreclosed properties are back on market but cannot be moved from their original space. Players who wish to sell their property must do so during their turn in an auction to all players, the highest bidder wins and buys the property at auction price.

Hint: players low on cash may want to auction some of their property off to prevent going broke.

When the "Gold has run out!" newspaper card is drawn, the game is over. All properties shut down and are now worthless. Calamityville is a ghost town once again!

Players count their cash and the one with the most money wins the game!

In the event of a tie, the player with the most property wins the tie breaker. 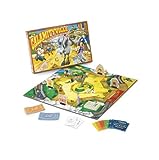 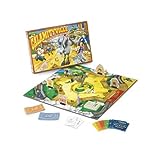