Be the first team to score 30 points.

The "Buzzword", which is found at the top right corner of each card, is contained in the answer to each of the 5 clues. For example, here are the clues and answers for the Buzzword Tooth:

Divide into 2 teams. Each team chooses a name and writes it in an oval on the Scoreboard. Keep the Scoreboard and Marker nearby. You'll need a damp tissue to wipe it off.

Shuffle the 5 scoring cards, and deal 1 to each team. The team with the highest number goes first. Combine all Scoring Cards faceup in a pile in order from 1 to 5, with 1 on top.

Place the card box nearby. The cards are printed with different colors on each side. Play through one color first and then switch to the other color to avoid repeats.

Each team scores 1 point for each correct answer given while either playing or stealing. Keep track on the Scoreboard.

The game ends when a team reaches 30 points and both teams have had an equal number of turns. The team with the highest score wins!

For an easier version of the game, players may choose to turn the Timer over twice to double the amount of time available for answers.

For the youngest players or beginning readers, the game also may be played without the Timer.

In that case, players should decide on a reasonable length of time for the team to guess. 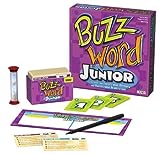