To be the first player to reach Finish; players race along the path by correctly answering questions.

The youngest player chooses a grade level equal to or greater than his/her current grade level (for the purposes of this game, players who are between grades are in the grade that they just completed).

The Reader reads the question from the chosen grade level, and the youngest player answers.

If the youngest player answers correctly, s/he moves his/her playing piece the number of spaces rolled on the die plus the number of grade levels above his/her grade level (if any) for the questions.

For example, fourth graders who roll a 2 and answer a sixth grade question correctly move 4 spaces (2 for the die roll plus 2 for answering a question two grade levels higher than their current grade).

If the youngest player answers incorrectly, s/he may not move. Play passes to the left (the player who was the Reader rolls the die, and the player to his/her left becomes the Reader for this turn). The first player to reach Finish is the winner.

The Reader picks up the top card and reads aloud the subject at the top (English, Math, Science, Social Studies, or Grab Bag). Readers should pinch cards shut so that the answers are hidden inside the cards.

Each card has six questions on it, one for each grade level in the game (1-6). After hearing the subject, the Player announces a grade level equal to or greater than his/her current grade level.

Players earn a bonus for answering questions from grade levels higher than the grade they are in (please see Moving and Bonus Points, below). Players may not choose a grade level lower than their current grade.

During the summer, Players' grade levels are the grades that they just completed. Sixth graders, and players who have completed sixth grade, may only answer sixth grade questions.

When Players answer correctly, they move their playing pieces the number rolled on the die plus a Brain Quest Bonus of one space for each grade level above their current grade.

For example, a third grader who rolls a 4 and correctly answers a sixth grade question moves seven spaces on this turn (4 from the die plus one extra space for each grade above third grade). Sixth graders may not earn Brain Quest Bonuses.

Players must move the full number of spaces they earn on each turn (exception: please see FINISH, below). Player's turns are over after moving.

Players may not move when they answer incorrectly, and their turns are over.


Players who have completed sixth grade

Players who subtract from a die roll and end up with 0 or a negative number lose their turn.

When Players reach the track, they move their playing pieces along the lanes of the track that have the same number as their grade levels. For example, all first graders will move along the track marked "1".

Players must move through the foursquare portion of the board in numerical order, starting at space 1.

The first person to reach Finish wins the game.

Players may stop on Finish even if they have more spaces left to move (this is the only time that Players may move less than the full amount of the spaces that they earn).

There are two types of questions in the game that Readers should take special care in reading: questions that include an underlined space (____) and questions that

have the letters in dashes between them (for example, M-r-s).. Players fill in missing words for questions with an underline space; Readers should say "blank" whenever the underlined space appears so that Players will know where the missing words belong.

Questions that include letters with dashes usually deal with spelling; when Readers see dashes, they should say each letter separately.

Finally, our special Peek and See Cards are designed so that Readers can play along too - so don't peek! 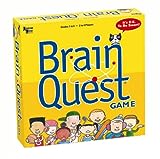