Blood Rage is not just a simple area control game. While winning battles can certainly be a path to victory, you can sometimes gain a great deal by dying. In a suicidal battle, you can gain glory as your troops are sent to Valhalla. And at the same time you deplete cards from the hand of the winner, weakening them for future battles.

Quests can score huge amounts of glory. They're much too powerful to ignore. But if you collect too many of them, you may be too weak to accomplish them. You need to strike a balance.

It's also important to watch the other players as they invade and pillage. If you can figure out which quests they are committed to, you have a much better chance of stopping them from completing those quests.

Most cards are named after a specific god, with each god providing a different kind of gift. If you stick mostly to cards named after one or two Gods, you should do well. Here's what you can expect from each god:

You generally should strive for a relative balance of card types. Ignoring a card type completely (such as Quests, Upgrades, or Battle Cards) won't make you automatically lose, but it may cost you!

Drafting is a little different in a 2-player game. Players select 2 cards to keep (instead of 1), placing them face down on their clan sheet, and pass the rest to their opponent. This is done two more times until each player has placed 6 cards on their clan sheet. Then the remaining 2 cards are discarded. 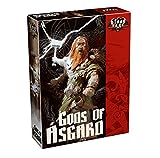