The early 1800s is a time of immense construction and urbanization. You are a world-renowned master planner who has been asked by two different cities to help them rebuild their city centers.

Projects of such significance require the expertise of more than one person, so for each assignment you are paired with another master planner to execute your grandiose plans. Will your planning and collaborative skills be enough to design the most impressive cities in the world?

On each turn you select two tiles from your hand, reveal them, then work with your partners to place one of your selected tiles into each of your two cities.

At the end of the game, each city is scored for its architectural grandiosity. Your final score is the lower of the scores of the two cities you helped design, and the player with the highest final score wins the game.

To win, you have to share your attention and your devotion equally Between Two Cities.

The game is played in three rounds. At the start of each round, you draw a random hand of tiles. On each turn, you secretly choose two tiles to place face-down in front of you.

If you have more than one tile remaining in your hand, pass your hand to the next player. Then all players flip their selected tiles simultaneously and place one of them in each of their cities.

The tiles you select and their positioning determines how many points you score atthe end of the game. See Scoring (page 4) for a detailed description of how each tile type is scored.

At the end of the game, each of your cities must form a 4x4 square of 16 building spaces-12 building tiles and two duplex tiles. You may never play a tile in any position that would cause the end result not to be a 4x4 square.

All players conduct the steps below simultaneously.

Draw seven building tiles from the box to form your hand. Then take the following steps in order:

Choose: Secretly choose two of the tiles from your hand to play. Put the remaining tiles face-down on the table above the city to your left and place the city's token on those tiles.

This signals to the other players that you have finished choosing your tiles. When you have finalized your choice, you may not change it, nor may you look at the hand you passed.

Reveal: Once every city token has a stack of tiles under it, all players simultaneously reveal their chosen tiles by placing them face-up on the table in front of them.

All tiles must be oriented in the same direction so that you and your partner can read the scoring key on each tile, and all tiles must be placed adjacent to at least one other tile in that city (they must share an edge).

Note 1: You must place all tiles so that your final city is a 4x4 square. After placing, tiles in the cities are set In place and cannot move.

Note 2: Very rarely it may happen that a player does not want to place tiles until another player places first (in the spirit of partnership, we discourage this, but it can happen).

If this happens, the player with the lower value in the seating randomization places first.

Repeat: If there is more than one tile under the city token to your right, pick up those tiles and choose, reveal, and place again.

When there is only one tile remaining under the city token, discard it face-down to the center of the scoreboard (don't place it back in the box with the other tiles) and begin round two.

At the end of round one, each city will consist of six tiles.

Draw three duplex tiles to form your hand. Secretly choose two tiles for placement in your cities, then place the third above the city to your left under the city token to signal that you have made your decision.

Now reveal and place two tiles, one tile into each of your cities. Just like in round one, when placing your tiles you may openly discuss strategy with your partners to determine the best city and location for your chosen tiles.

A total of two duplex tiles will be added to each city in this round, because each player adds one duplex tile to each of their cities.

At the end of the round, take the remaining duplex tiles from under each of the city tokens, discard them face-down to the center of the scoreboard, and begin round three.

Round three follows the same steps as round one, except that you put your remaining tiles face-down under the city token to your right and you pick up yourtiles from your left. At the end of round three, each city will be a complete 4x4 square.

After round three is over, clear the scoreboard of discarded tiles and unfold the scoreboard. One player calls out each building type in the order listed on the reference cards (top to bottom).

Your final score is the lower of the two scores of your cities, and the player with the highest score wins.

Second tiebreaker: Winners add and compare the quantity of buildings by type in both of their cities, starting at the top of the player aid and moving down until the tie is broken.

First count the number of shops in both of their cities. The player with the most shops wins. If still tied, move on to factories, taverns, offices, parks, and finally houses.

In a 2-player game, you each design two cities on your own (four cities total): one to your left and one to your right. On each turn you choose two tiles and place one in each of your cities.

Each of the rounds from the 3 - 7 player game is played twice as indicated below:

At the end of the game, score each city the same way as in the 3 - 7 player game, but instead of only counting your lowest-scoring city, add together the scores of both of your cities to determine your final score. Ties are broken using the second tie-breaker rule from the 3 - 7 player game.

Note: Without the element of partnership, the 2-player variant can be more aggressive than the 3 - 7 player game. You have much more influence on your opponent's choices when passing tiles. 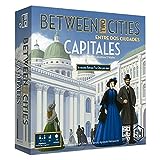