At the farthest reaches of the Empire, four barons fight for the power. With their armies of knights, they extend their territories and build villages, strongholds and cities. At the end of this race for power, one of them will become King.

Each player must conquer territories, build and protect villages, strongholds, and cities. When at least one player becomes a Duke, the player with the most Victory points is crowned King and wins the game.

Each tile is made up of 3 independent hexagons. Each hexagon represents one space of the board game and is one of the five types of land. Each land type, except the Lake, is associated with one Resource token:

Arrangement of the first cities and knights

After a moment of reflection in which he examines the board, the first player places one city and one knight in the space of his choice.

Then, in clockwise order, each player does the same except for the last player, who places 3 cities instead of 1, with one knight in each of them.

Then, proceeding counterclockwise, each player other than the last player then places 2 cities with 1 knight in each of them.

Thus, each player will start his first turn with 3 cities, each with one knight, in three different spaces of the board. The remaining pawns are each player's reserve.

The game is a succession of turns which are played in clockwise order. On his turn, a player can take ONE and only one of the following six actions:

Choose one and only one city and place up to 2 knights taken from the reserve into the same space as the city. If the city's space is adjacent to one or more lake(s), you can place up to 3 knights instead.

If you have no knights in your reserve, you cannot take the recruit action.

The red city is on the edge of a lake. Thus the red player recruits 3 knights.

Move 1 or 2 of your knights to an adjacent space.

The two moves are completely independent (the starting and destination spaces of the knights can be different). However, you cannot move the same knight twice.

There is no limit to the number of your knights that can be present in the same space.

A knight cannot move to the following spaces:

Destroyed knights and villages are returned to their owners' reserves.

Important: When a player destroys an opponent's village, he takes from that player a Resource token.

The yellow player moves a knight to a space which already contains one of his knights, a red knight and a blue village.

With his 2 knights he destroys all of his opponents' pawns, and takes a Resource token from the blue player.

Replace all or any of your knights on the game board with a village or stronghold from your reserve.

Knights replaced in this way are returned to your reserve. For each build, you immediately earn one Resource token corresponding to the land type of the space.

There are only two spaces where the red player can build strongholds or villages.

He replaces one knight with a strong- hold and the other with a village. He then takes one Mountain and one Fields Resource token, corresponding to the spaces where he just built.

Each of the 4 different tokens are worth Resource points which can be used during the Action E - Noble title (gold number), or counted and added to the player's score at the end of the game (silver number).

Replace one of your villages with a city from your reserve (this is only possible if you have a city in your reserve).

The replaced village is returned to your reserve.

When you build a new city, you immediately earn 10 victory points: move your score counter down one space.

In this situation, only two villages can be replaced with cities.

The blue player replaces one of his villages with a city and earns 10 victory points. He now has 25 points.

You cannot build a city:

Take two knights from your reserve. One of them is permanently removed from the game (put it back in the game box) and place the other in a free space of your choice on the edge of the game board.

The green player removes one of his Reserve knights from the game and then places another in the free Forest space on the edge of the game board, behind the red player's villages.

You cannot place the knight:

All players start the game with the title of Baron. They can then become Viscount, Count, Marquis, and then Duke.

Discard a minimum of 15 Resource points to acquire a higher Noble title, and then move your score counter one space to the right on the scoreboard.

Discarded Resource tokens are returned to the resource bank. Watch out!

The yellow player spends 16 Resource points and moves one space to the right.

He has advanced from Count to Mar- quis, and now has 45 points.

When one player becomes a Duke (the last column on the scoreboard with the 60, 70, and 80 values), continue until the end of the round so that each player has played the same number of turns.

Each player adds his unused Resource points (silver number) to his Victory points on the scoreboard. The player with the most points becomes the King and wins the game.

In case of a tie, it is the tied player who is furthest from the first player in turn order who wins.

The yellow player has 70 points on the score board. He has also 3 Resource tokens left with 4 points on them.

His final score will be 74 points. 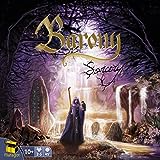 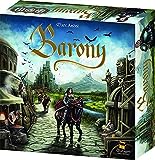