To remove as many wooden pieces from a carefully balanced plate without the plate falling. At the end, whoever has collected the most pieces, is the winner.

Together, all the players place the wooden pieces on the plate. Two pieces may be stacked if desired. The center of the plate should be left clear, since the parts in the middle are too easily removed.

The base is placed in the middle of the table. In the hollow of the base a cork ball is placed (for children and beginners, we recommend larger ball).

Now the plate must be balanced on top of the ball. With a little practice after two to three trials this will be no problem - it's much easier than it looks.

Tip: It simplifies setting up even more if the final balance is achieved by slightly moving individual pieces on the plate.

Once the plate is balanced on the cork ball, the game begins.

Players take turns. The player with the shakiest hands begins. He takes any piece from the game plate, without touching the plate.

Anyone who dares may, after prior announcement, take a pair of pieces at once. Avoid tilting the plate too much. The player keeps the pieces they have taken.

If the plate threatens to topple during an attempt, the player may replace the pieces. The player must also forfeit a piece already collected, but only if he has one. That piece is put aside. The next player takes their go.

If pieces fall off of the plate, or the whole plate topples, the game ends.

If a plater dare not attempt to take a piece, he can pass. He must, however, give the next player who succeeds, a wooden piece as a gift.

If several players pass, each must give a piece to the next player to succeed. Players who have passed, need no longer pay a forfeit if after them a player has made a failed attempt.

A game is over when:

Each piece collected counts for one point. Whoever caused the pieces to fall forfeits 4 points (and can get a negative score). The scores are recorded.

The game continues until the leader has over 30 total points. This player is the winner. If several players have over 30 points, the player with the highest score wins.

If you have a digital kitchen scales, the collected parts can be weighed at the end of the round.

The winner is the one who collects the greatest total weight over the rounds. The game can be played to a total weight, e.g. up to 300 g. Who spills the plate, has 40 grams of his total earnings deducted. 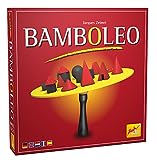