Back to the Future Game Rules Great Scott! Biff stole the DeLorean and took a joyride through time. Work together to complete key events from the Back to the Future film trilogy in order to find and return lost items.

The players win if they return all items to the proper locations in the correct years. The players lose if the OUTATIME marker reaches the " game over" space.

Back to the Future: Dice Through Time takes place over a series of rounds. A round is comprised of the following steps:

The player with the First Player marker draws a number of Event cards as determined by the player count:

If you run out of Event cards, reshuffle the discard deck to form a new draw deck.

Next, reveal the drawn Events one at time. If you draw a Special Event, perform the action listed on the card.

Some Special Events have an immediate effect, which you perform right away before discarding the card.

If you draw multiple Special Events, perform immediate effects in the order they were revealed.

If a drawn card is a Location Event, place it in its corresponding space on the board in the proper year and location.

If an Event card features the Biff icon

, you must immediately move that year's Biff standee to the location. More than one Event may be placed in the same location.

Before rolling, any dice that were placed on the board in a previous round may be taken back into hand by their owners (see Rippling Dice'). Players then simultaneously roll their dice.

Beginning with the First Player and proceeding clockwise, players take one turn each, using their dice to carry out actions. Players must complete their turns entirely before play passes to the next player. Actions are performed by "spending" a die.

Once spent, a die cannot be used to complete any additional actions or Events.

Don't forget to work together to solve events and return items!

Actions are performed by "spending" dice; move a die onto your Player mat to indicate it is spent. Once spent, a die cannot be used again this turn. To complete an Event, you must spend dice that match the icons on that Event card (see Completing Events and Finding Items). Depending on your roll, dice can also be spent to perform the below actions:

Any single die may be spent to move one location to the left or right in your year.

Any two matching die results can be used to activate MR. FUSION! You may spend two dice with matching results to gain any one result above, which can be used to perform an action or to help complete an Event.

In order to complete an Event and clear a location, your DeLorean must be at the location, and you must spend a die or dice matching the icon(s) on the Event card. For example, to complete the "Lou's Cafe

Event, you must spend dice showing the

icons. Events may not be completed while the Biff standee is on their location. You must move Biff using either a

die or by using MR. FUSION to use two matching dice to gain the

Two or more Events may appear in the same location, making the space-time continuum more difficult to repair.

If this happens, you must complete all Events on that location at the same time. You may need to ripple dice to help other players clear the location (see Rippling Dice').

When you clear a location, discard all completed Events to the left of the board. Remove any Paradox tokens from that location.

Then draw one Item card from the Item card deck of the year you are in (even if you completed multiple Events).

Place it below your Player mat. The Item card will indicate the year and location where it must be returned. Item pictures on each location also indicate where Items should be returned.

During your turn, if you are on a location matching one of the misplaced Items you are carrying, you may immediately return it if there are no Biff standees or incomplete Event cards at that location. If you complete an Event and/or move a Biff standee off the location, you may then return the Item.

Each time you return an item to its proper place and time, your trusty canine assistant Einstein fetches help for you! Einstein's bonuses provide an icon, which players can spend as if it were a die.

Any player may remove an Einstein token from the game during 3: Perform Actions to gain its effect.

While the consequences of interfering with the timeline can be disastrous, sometimes it's necessary to help your future selves.

During your turn, you may choose to place an unspent die on your DeLorean's location (without changing its result).

On a subsequent turn, any player on that location or in the same location in a future year may spend a rippled die, then return it to its owner's Player mat.

You may not carry a rippled die with you to use on a different location.

Rippled dice may be reclaimed from the board by their owners at the start of a round during the first step of the round (Draw Event Cards) before rolling dice.


Encountering your Other Selves

Meeting your other selves weakens the space-time continuum, though sometimes it is a risk you must take.

When your DeLorean moves to the same location as another DeLorean, you must immediately advance the OUTATIME marker by two spaces as a penalty.

If the year with the most locations also contains any Paradox tokens, advance the OUTATIME marker one additional space to the right per Paradox token present in that year.

If two years are tied for the most locations with Event cards, count the Paradox tokens and Events in the earliest year and advance the OUTATIME marker by that number.

If the OUTATIME marker ever reaches the Game Over space, time has run out! Everyone has been erased from existence; the game ends and the players lose! Great Scott!

Pass the First Player marker to the player to the left . A new round now begins.

As soon as the final misplaced Item has been returned to its proper year and location, the players immediately win the game! The space-time continuum is repaired, and Doc and Marty have saved Hill Valley (and the universe) from catastrophe 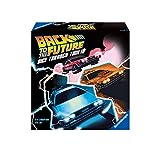 Back to the Future: Dice Through Time

Back to The Future Adventure Through Time Game