On your turn, you will play the role of 'The Critic' and ultimately decide who wins the round. Here is how your turn works. 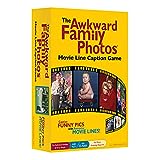