The aim of the game is to be the first player to get rid of all of your cards. As you switch and smash your way through the game, you will test your reflexes and exercise your powers of observation, so stay alert!

Shuffle the deck and deal all of the cards face down, giving an equal number of cards to each player.

The youngest player begins the first round, with play moving clockwise.

If any players smash incorrectly at any time in the game, cards are split between the offending players.

Example of a regular smash:

Example of a counting smash:

As you change direction, players must immediately begin counting backward; so if you reveal the Change Direction Card at "eight avocados", the previous player must then place a card and say "seven avocados".

Players then count down to "one avocado" before returning to "15 avocados" and so on. Watch out for this rule, it can be tricky!

(Feel free to omit to make it easier for younger players).

If you have a "double smash", where there are two reasons for a smash at any one time, these cancel each other out and play continues as normal. Anyone smashing their hand down in error loses the round and they must take the cards from the center!

Example of a double smash: 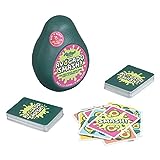