Players travel across the universe, establishing colonies on uninhabited planets, once great worlds of ancient alien species. Players must defend themselves across the expanse of the universe from other hostile factions of human explorers.

Some players might even find ancient alien artifacts along the way that offer powerful technologies to serve in this new struggle for interstellar dominance. The player who gains the most victory by the end of the game will be considered the winner.

The current player may perform one of the following actions:

Note: Homeworlds are not considered Planets and as such, they cannot be mined, built on, attacked, or blockaded (see later). You may always recruit troops and launch ships from your Homeworld.

Distribute up to 2 Troops among your Homeworld and any Planets you occupy. Troops can only be taken from your supply (not the box). The limit of items for each planet is 3.

You may also remove any number of Troops from Occupied (even Blockaded) Planets instead. These troops go back into your Supply.

Launch: return 1 Troop to your supply from an Occupied Planet and place a Starship from your supply into Orbit of that Planet.

Navigate: flick or strike (not push) one Starship in play. You may ricochet off other Planets. If your Starship hits an enemy Starship, this is called a Ram, and both Starships are destroyed and returned to their respective owner's supply.

Only the first two Starships that collide are destroyed. No points are earned for destroying a Starship through ramming.

When Navigating, if your ship stands on its edge and rolls, wait for the ship to stop moving. If it is still on the board, then the player to your left gently knocks it with their finger so that it falls with the sticker side up. If it rolls of the board, it's a Navigational Error! The ship is returned to your supply.

Land: return 1 Starship to your supply from the Orbit of a Planet and then place 1 Troop from your supply onto that Planet. You may not land on a Planet that is occupied by another player.

After spending your Movement Points, check to see if an Attack must be made.

Attacks occur after movement has been completed. Starships of the active player that are in position to attack must attack. They only participate in one attack only.

Battleships: one of the technology advancements in the game can give a player a Battleship. This ship counts as 2 Starships when attacking. It takes 3 Starships within short range to destroy a Battleship. Destroying a Battleship earns the attacking player 2 VPs.

The active player receives 1 VP for each destroyed item from that Planet. Note that the active player may not attack a Planet if there are any other players' Starships in Orbit of the Planet.

You may build either a Research Facility, Colony, or City. Planets may have multiple types of each structure, however, you can never exceed the limit of 3 structures per planet.

Increase a Technology by 1 level. The following rules apply:

Scan Planets and End of Turn

After taking your turn, you may secretly look at any of the face down planets that you are in orbit around. After looking, you must return the Planet(s) to their face down side.

The player to the left of the current player now takes their turn.

An Occupied planet is Blockaded if at least one enemy Starship is in Orbit around it. The active player may not build, land, launch, recruit, develop technology, or mine on any planet they occupy that is being Blockaded.

A player cannot attack a Planet if there are any opponents' Starships in Orbit of the Planet. A Planet can be both Defended and Blockaded at the same time.

Once a player takes the last VP point from the pile, the current player will finish their turn and then all other players will have one last turn.

If any additional VPs are earned during the last round, these VP may be taken from the box.

Each player earns additional VPs based on planets and quadrant bonuses:


The player with the highest total of VPs in the winner. 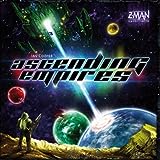