Nowhere is nature's beauty quite so evident as in the resplendent colors of an arboretum. In Arboretum, you create carefully planned paths for your visitors to walk as they take in the colorful explosion of buds and leaves.

The cheerful cherry blossom, the fragrant dogwood, the mighty oak - all have a place in this peaceful haven. But the tranquil setting belies the game's competitive heart.

You must choose which cards to plant in your arboretum and which to keep in hand, as only the most expert curator will win the renown of nature enthusiasts everywhere.

Score the most points at the end of the game by creating the most sumptuous arboretum.

Example of a 3-Player Game

Players take turns, beginning with the start player and proceeding clockwise. On your turn, you must carry out these steps in order: draw 2 cards, play 1 card to your arboretum, discard 1 card.

The game end is triggered when there are no more cards in the draw pile. The player who drew the last card finishes their turn normally, and then scoring occurs.


Gaining the Right to Score Paths

The dealer calls out each species of tree in the order listed on the scorepad. As each species is called, players reveal the cards of that species in their hand.


Note 1: It is possible to gain the right to score points for a species that is not present in your arboretum. In this case, you will not score anything for that species, but you may have prevented an opponent from scoring points for that species.


Note 2: If nobody has cards of a particular species in their hand, then all players have the right to score points for their single best path of that species.

A path is a sequence of orthogonally adjacent cards of ascending value, where the first and last cards are of the same species. Each card in the path must be a greater value than the card before it, but the values do not have to be consecutive.

The only cards that must match the species being scored are those at the start and end of the path; the cards in between can be of any species.

To score a path, use these criteria:

Note 1: A single card may be used in multiple different paths (of different species).

Note 2: Even if you have multiple viable scoring paths for a species, you still may only score a single path. Choose your most valuable path!

Total players' scored paths (using the included scorepad). The player with the most points wins!

At the end of this 8-player game, the players have the following sums in hand (individual card values indicated in parentheses):

Talia scores points for her Jacaranda, Oak, and Royal Poinciana paths. She doesn't have any Maples in her arboretum, but she did prevent Jonte from scoring his Maples.

Jonte scores points for his Blue Spruce and Cassia paths, and also for his Jacaranda path (he tied with Talia for the rights to score Jacaranda).

Rina scores points for her Dogwood and Willow paths. She would have scored for her Royal Poinciana path as well, but Talia has the "1" in hand, negating Rina's "8".

Below is Talia's arboretum at the end of the game. Her final score is 19 points. 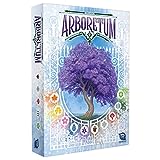 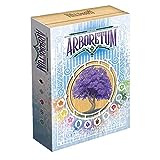