To add more variability to the game, players can add achievements to the game play. There are three separate achievement decks: immediate a, mid-game b, and end-game c.

As part of setup, before races are selected, shuffle each deck separately and deal out one card from each deck face up above the main board. These are the only three achievement cards that will be used this game.

Each card has a condition and a point value, which will be scored by each of the players who fulfill the condition at a specific time.

If players desire to play a simpler version of the game, they can play without workers, such that the only basic actions available are to gain

During setup, flip the player mats over to the side without the special racial actions ("b" side) d and don't collect any worker pawns.

Houses can still be built, but the only benefit they provide is 1 fleeting influence as income. To compensate, houses only cost

2 to build. When a prestige building is selected through the Call to Vote, there is no need to place the card next to the board. Simply remove it from the game instead. This variant should not be combined with solo play.

After playing a few games, when you feel everyone at the table has a good grasp of the rules and strategy, you can play a single, permanent game that will shape the future of Gloomhaven.

Play the game as normal on the thematic side of the board, and, once a winner has been determined, give the winner the event card corresponding to the race they won with. On that card, they must fill out three pieces of information:


Once these pieces of information are written onto the corresponding blank spaces of the card, take the card and shuffle it into the city event deck for Gloomhaven. The other eight event cards will never be used. 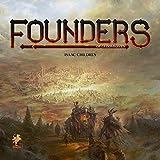