This Heroes' Book and the Overlord's Book include the rules of the game for each side, as well as descriptions and setup instructions for the scenarios.

Gems are used to determine how much energy is available to the heroes (blue gems) and the Overlord (red gems). Each gem represents one unit of energy.

Numbered from 0 to 15, it is used to keep track of the number of turns played in a scenario as well as the number of life points for the Overlord's main characters. In specific scenarios, the turn track might have additional uses.

It is placed on the turn track and indicates the number of turns played in a scenario. The turn marker advances one space at the start of the Overlord's turn (See Overlord's Book).

These tiles represent a specific character or a group of identical models controlled by the Overlord. The Overlord's Book explains how to use them in detail.

This is the board used by the Overlord to control their units. The Overlord's Book explains how to use it in detail.

Certain characters have mastered magical arcana and are able to cast powerful spells. The spell cards available to a character are listed in the scenario and are placed faceup next to their hero sheet, or next to the Book of Skelos if that character is controlled by the Overlord. The rules for spells are described on page 16.

Attack your area, ex- u eluding yourself and undead ^^characters; roll • . Char-

Icons: indicates that the spell is an area attack that

affects an entire area and all characters withinit (the spell caster and all friendly and enemy characters). indicates that the spell is a reaction spell that can be cast anytime during an opponent's turn.

These cards represent the equipment, weapons, and items that the heroes can use during their mission.

Shuffle the cards specified by the scenario to create an "asset deck". When a player acquires a piece of equipment, they place the card faceup next to their hero's sheet or next to the Book of Skelos in the Overlord's case.

Weapon cards have the following features:

Weapon cards also have one or more bonuses:

The arrow on a die icon means that the player may reroll one die of the matching type once for free (without performing a Reroll action).

Icons describing the item's use.

Using an item is a free action (i.e. do not assign gems to an action space) unless specified otherwise.

The Life Potion item card is special because it does not work like other items:

An aggressive hero (see page 8) can use it (without assigning

any energy gems, just like any item) to move 2 gems from their Fatigue zone or Wound zone to their Reserve zone,

Then this card is discarded to the game box.

They explain the meaning of each skill icon that appears on the heroes' sheets and the Overlord's unit tiles.

These bases come in 5 different colors and are clipped to the Overlord's models to indicate which unit tile they are associated with. (The color of the bases must match the unit tile's colored border).

These tokens are placed on the board as specified by the scenario to indicate the areas in which the Overlord's reinforcements will appear.

When a character casts a "Mitra's Halo" or "Set's Halo" spell, they place one of these tokens around that model's base. Remove the token when the spell ends.

These tokens are placed on the board as specified by the scenario to indicate the areas in which there is a chest. Remove the token from the board once the chest is open.

The tokens used with the Book of Skelos are described in the Overlord's Book.

Each hero has a sheet with their name, action spaces, recovery chart, skill icons, encumbrance chart and energy zones.

These spaces represent the 6 actions a hero can perform and indicate their exertion limit and the hero's attribute for each action. The attribute's level is indicated by the color of the die associated with the action, or by the base movement value in the case of the Movement action (See page 15).

These represent a hero's special talents. The description of each skill can be found on the skill game aids. The red number in the lower-right corner of each skill indicates the encumbrance level from which the hero stops being able to use that skill (See page 19).

The Fatigue zone contains gems that the hero has used and can later recover. During the hero's Stance phase, each hero moves a number of gems from their Fatigue zone to their Reserve zone based on their stance (See page 8).

Drop their weapon and item cards in their area on the board, and remove their model from the board.

This shows the encumbrance level from which the hero starts losing points from their base movement value (See page 19).

The Reserve zone contains the hero's available energy gems, which can be assigned to perform actions. At the start of the game, place as many blue gems as indicated by the number in the lower-left corner of this zone. This represents both the character's potential for action and their life points.

Damage is equal to the attack power (the number of symbols rolled by the attacker) minus the character's defense power (See page 11-12). 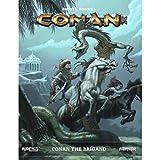